Dutchman to build futuristic house with the use of 3D printer

A Dutch architect announced an intention to create a building, using only materials printed on a 3D-printer. This will be the first of such projects planned in many countries, Slashgear.comwebsite reports. 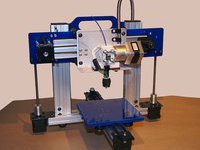 Dutchman Janjaap Ruijssenaars will create a building with the use of only sand and a special solution that binds stronger than cement. Afterwards, the section received with the help of the printer will be connected with each other.

According to the BBC, the construction of such a building will cost 4 or 5 million euros. The shape of the building will look like the infinity sign. Despite the fact that one will need to use concrete in the construction, the architect said that he was delighted with the 3D-printing technology, as well as with the design of the future building. According to him, it reflects both commercial and personal interests.

The plans for the construction of such houses exist in several countries. The architect said that a private person in Brazil had shown interest in the project and planned to use it as a museum.

The 3D-technology in construction saves energy and resources. The first building is to be completed by the end of the year.

In November 2012,  24-year-old American citizen Cody Wilson started to use the technology for his project of plastic weapons, which, as he said, would be available for download in any part of the. Because of this project, Wired magazine included him on the list of world's most dangerous people, along with Bashar Assad, Eugene Kaspersky, drug lord Joaquin Guzman and Iranian Gen. Qasim Soleimani.