Extraterrestrial diamonds from Yakutia to kick off global industrial revolution

The decision to develop the deposit of extraterrestrial diamonds on the border of Yakutia Republic and the Krasnoyarsk region of Russia will not affect the diamond market, newspaper Vzglyad wrote. The director of the Institute of Geology and Mineralogy named after Sobolev, Nikolai Pokhilenko, said that the diamonds "can make a revolution in instrumental, stone-cutting and drilling industries, but they can not change the diamond market drastically, because they have nothing to do with jewelry diamonds." 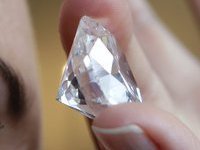 The deposits of super solid diamond - impactites - were discovered in the Popigai Basin by Soviet geological expedition in the mid-1960s. The scientists determined that the deposit appeared about 35 million years ago, after an asteroid, about seven kilometers in diameter, rammed into Earth. According to Gazeta.ru, Soviet specialists were busy with producing synthetic diamonds during the 1960s, so the studies of impactites were stopped, the information about their deposit was classified.

In late 1970s, it became known that the abrasive qualities of Popigai diamonds were significantly higher than that of synthetic and natural stones. About three years ago, Russian experts together with their Ukrainian colleagues conducted a series of experiments to study the properties of these minerals. It turned out that impactites differed from conventional diamonds considerably. Moreover, diamonds with such properties have never been found anywhere else in the world. Therefore, experts believe that the Popigai diamonds are of extraterrestrial origin. Nikolai Pokhilenko said that the mineral originated from graphite as a result of a meteorite impact, when pressure reached 1.5 million atmospheres and temperature went up to 3,000 degrees Centigrade.

It is expected that the Russian impactites will kick off a revolution in the industry, reports NTV. "They can replace synthetic diamonds in some areas, for example in the jewelry industry, in the production of turbines and precise parts for aircraft, in precise engineering, in the production of composite materials, such as wear-resistant bearings," the academician said.

For the time being, there were two deposits of impact diamonds discovered - "Udarnoye" and "Skalnoye" deposits. The reserves of these two deposits are estimated at 147 billion carats. The market price of the new material may reach 2-2.5 dollars per carat.

A new scientific mission to Popigai Basin is planned to take place soon to explore the deposit further.