A group of paleontologists discovered unique materials for the study of mammoths. The materials, including live cells of the animal, were found during a paleontological expedition in Yakutia. The discovery was made at the depth of 100 meters. 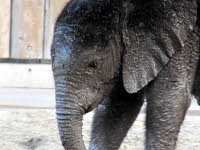 It goes about the fur of the animal, its bone marrow and adipose tissue of the mammoth, the head of the expedition and director of the Museum of Mammoth, Semyon Grigoriev said, Khakassia news agency reports. Expedition Yana-2012, held in the Ust-Yansky area, involved experts from Russia, Korea, the USA, Canada, Sweden and the UK. The results of the expedition will be announced on the pages of prestigious scientific journals this fall.

Last October, students of specialized establishments found the bones that belonged to the animal species which they could not identify. The analysis conducted at the Academy of Sciences found that the remains belong to various mammoth species. The scientists assumed that there was an animal cemetery in the area of the finding.

It is not the first time when young naturalists unearth mammoth bones. Previously, researchers discovered mammoth remains in the village of Elanka, in the Khangalassky, and Ust-Yansky districts of Yakutia.

It was previously reported that Yakutian and South Korean scientists planned to clone a woolly mammoth. To do this, they are going to transplant the genetic material of the prehistoric animal into elephant's eggs.