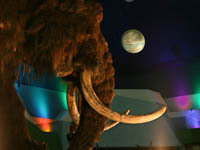 The remains of the mammoth, which were found near the village of Batagai in the north of Russia's Yakutia Republic, will probably help scientists clone the prehistoric animal. The researchers discovered the well-preserved fragments of mammoth's bone marrow.

The remains of the mammoth were found in Yakutia in August 2011. A group of Russian and Japanese scientists have recently discovered the genetic material, which will be required to clone the prehistoric animal. The scientists from Yakutia's Mammoth Museum and Japan's Kinki University have been studying the possibility of cloning mammoth for two years.

The scientists said that bone marrow in ancient organic remains was usually damaged due to the longstanding exposure to permafrost. Such material can not be used for obtaining biologically active materials. The finding in Yakutia is extremely successful from the scientific point of view, they said.

In case the researchers receive the required genetic material, it will be real and possible to clone the mammoth, the Japanese scientists said. The researchers will need to implant cell nuclei from the bone marrow of the mammoth into the egg cell of the animal's closest relative - the elephant.