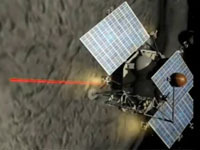 Russia's Phobos-Ground interplanetary space station, the connection with which was lost soon after launch on November 9, showed a sign of life. A European station received a signal from the Russian spacecraft on Tuesday night, Gazeta.ru website reports.

The ESA's station in Perth, Australia, made contact with the probe with the link holding from 20:25 GMT to 21:11 GMT, Interfax reports.

The interplanetary station was launched into space at night of November 9. After 688 seconds of the flight, the station separated from the second state of the booster rocket. Afterwards, the probe was supposed to enter the departure trajectory to Mars, although it did not happen.

The cost of the project reportedly makes up nearly 5 billion rubles.

Officials with Russia's Roskosmos acknowledged Tuesday that there were slim chances for finding the probe.