Joseph Skipper, a well-known US researcher, a virtual archeologist, found railway tracks, a railway station and a railway carriage on the photos of Mars. 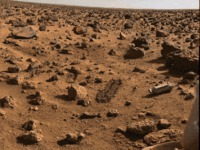 Skipper is known for his meticulous studies of high-resolution Google Mars space images, Dni.ru website reports. This time, the researcher found a whole transport system on the photos.

Many are skeptical about Skipper's discovery. There is a dash line on the  satellite images, but it was very brave of Joseph Skipper to call the line a railway. However, other scientists could not explain what the dash line could actually be.

The "tracks" stretch to Gale crater on the red planet. NASA plans to land its new rover in the area of the crater. The rover will be launched to search for water and life. The "railway tracks" start some 900 kilometers far from the crater.

The "archeologist" also discovered various constructions near the crater, which, as Skipper said, could be a railway station. He found a square-cut object not very far from the station. The object - most likely a railway carriage - is located right on the "tracks."