Debris of US satellite to fall down on Earth Friday 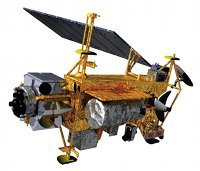 The debris of a defunct US satellite will fall down on earth earlier than was originally expected. The fragments of the USA's UARS spacecraft will reach the surface of our planet this Friday.

Scientists are still uncertain about the place where the debris may fall. It goes about 26 components weighing 532 kg in total. The designated territory, where the pieces of the spacecraft may fall, currently exceeds 800 km in diameter.

Specialists say that there is no reason for panic. The fall of the debris is highly unlikely to cause injuries among civilians in the USA. Most likely, the debris will fall down into the ocean, Rosbalt reports. It was previously said that the fragments of the US spacecraft could fall down on Moscow.

The Upper Atmosphere Research Satellite (UARS) is an orbital observatory whose mission was to study the Earth's atmosphere, particularly the protective ozone layer.

The 5,900 kg (13,000 lb) satellite was deployed in 1991 from Space Shuttle Discovery mission STS-48. The original mission life was to be three years. UARS originally orbited at an operational altitude of 375 mi (604 km) with an orbital inclination of 57 degrees. In June 2005, six of the ten instruments were still operational.

On October 26, 2010 the International Space Station performed a debris avoidance maneuver in response to a conjunction with this satellite

Author`s name: Editorial Team
21:11
Ukraine blows up ammonium nitrate to accuse Russia of chemical attack
19:35
German Leopard 2A4 heavy tanks spotted in Ukraine
17:46
Ukraine can skip Membership Action Plan on its way to NATO
17:34
Azovstal militants reveal how many days they can hold out
16:47
Russia and Ukraine reach agreement to evacuate wounded from Azovstal
16:12
Expert says why Kyiv was interested in nuclear weapon before Russian operation started
15:33
Putin at CSTO summit: Russia does not have any issues with Sweden or Finland
14:47
Renault Russia to start producing Moskvich cars
13:27
McDonald's decides to leave the Russian market completely, but then comes back
13:18
Bilateral trade between Russia and Finland collapses
World
Chechnya thanks the West for the weapons supplied to Ukraine