Perseid meteors can be seen well despite full moon 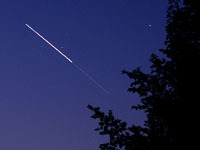 Skywatchers were today given advice on how to enjoy this year's display of Perseid meteors despite a full moon.

The Perseids, which come every August, are normally one of the highlights of the celestial year for amateur astronomers.

Under ideal conditions up to 100 of the shooting stars an hour should be visible when the shower peaks tomorrow.

But the glare of the full moon will make it difficult to see the fainter meteors.

The moon generates natural light pollution that can be equal to that from an illuminated city centre.

To help anyone hoping to spot the Perseids the National Trust has produced an online stargazing guide and listed some of its best "dark skies" locations, says The Independent.

The Perseid meteors will show up best in the Bay Area sky from 3 a.m. to 5 a.m. Friday and between 4:30 a.m. and 5:15 a.m. on Saturday, Jenniskens said. Between 30 and 50 meteors should be visible then - but only in the darkness outside the city.

The Perseids are named for the constellation Perseus where the meteors seem to originate.

Andrew Fraknoi, director of the astronomy program at Foothill College in Los Altos Hills, noted that unlike planets or single stars, meteor showers do not require special equipment.

"In fact," he said, "using telescopes or binoculars will limit your view to a small spot in the sky, and you're likely to miss the shooting stars", according to San Francisco Chronicle.