In the bowels of the Moon has more water than anticipated 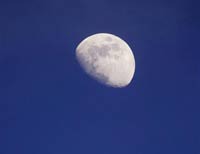 The moon has more water than scientists once thought, casting doubt on theories of its creation, according to a study.

Scientists measured seven samples of magma trapped as "melt inclusions," within crystals, according to a paper in the journal Science. The water content of the lunar magma was 100 times higher than previous studies have suggested.

Lower quantities of water and volatile compounds on the moon, when compared with the Earth and other inner planets of the solar system, have long been taken as evidence the moon formed during a giant impact that had enough energy to create seas of magma, according to the Carnegie Institution's Erik Hauri, the study's lead author. Today's finding challenges that view, he said, says.

For decades, the prevailing view of the Moon was that it was dry. Then, two years ago, a NASA probe crashed into a deep crater near the Moon's south pole and confirmed large amounts of water ice within the shadows. Meanwhile, measurements by an orbiting Indian spacecraft suggested that a veneer of water, generated by the bombardment of solar wind particles, covered much of the Moon's surface.

Now, scientists analyzing tiny fragments of hardened lava from long-ago lunar eruptions report that the fragments contain about as much water as similar magmas on Earth, meaning there is plenty of water inside the Moon too, according to .