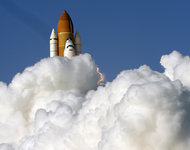 Two astronauts stepped into the history books on the fourth and final spacewalk of NASA's next-to-last shuttle mission Friday, installing an extension pole at the International Space Station and officially ending its construction.

The spacewalk began 30 minutes before schedule and will last about six and a half hours.

This spacewalk is the fourth and the last made from the Endeavour shuttle as it winds up its space career to be exhibited at a California research center in Los Angeles.

The last flight under the space shuttle program is to be made by Atlantis in July, according to .