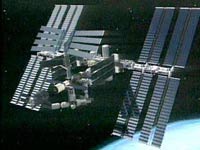 Space shuttle Endeavour is presently catching up with the International Space Station (ISS) prior to the time that was expected for the docking of the spaceship, NASA reported.

NASA elaborates: "The combined crew of 12 will begin almost 12 days of operations while the spacecraft are docked, including installation of the Alpha Magnetic Spectrometer-2 and four spacewalks.

Beginning at 9:16 a.m. (13:16 GMT), they will operate the shuttle and station's robotic arms to transfer the spare parts carrier, Express Logistics Carrier 3, from the shuttle to installation on the station. Among items on it are a spare ammonia tank, a high-pressure oxygen tank, two S-band antennas and 10 circuit breakers," informs.