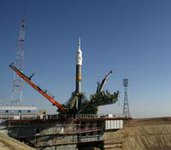 Three space explorers are venturing toward the International Space Station today after launching a week before the 50th anniversary of the first human spaceflight.

With Russian cosmonaut Alexander Samokutyaev at the controls, the final three members of the 27th expedition to the station are due at the outpost at 7:18 p.m. Wednesday.

The arrival will mark the end of a two-day trip that started with a brilliant launch Monday from Baikonur Cosmodrome in the former Soviet republic of Kazakhstan.

"We wish you luck," a flight controller at the Russian Mission Control Center outside Moscow told the crew. "This is a great anniversary flight," according to Florida Today.

Russia launched three spaceflyers aboard a Soyuz TMA-21 spacecraft that has been christened "Gagarin" to honor cosmonaut Yuri Gagarin and his historic flight, which took place on April 12, 1961. The Soyuz blasted off from Baikonur Cosmodrome in Kazakhstan at 6:18 p.m. EDT (4:18 a.m. April 5 local time) from the same launch pad used during Gagarin's historic flight.

The Soyuz "Gagarin" is carrying two Russian cosmonauts and one American astronaut to the International Space Station, where they will join three spaceflyers already there, rounding out the orbiting lab's Expedition 27. Docking is set for Wednesday, April 6.

"This is the first time that, that vehicle will be named after someone, and as soon as we learned that this would be the case, especially that Yuri Gagarin's name will be used to name a Soyuz spacecraft, we were very happy," said cosmonaut Alexander Samokutyaev, who is commanding the Soyuz TMA-21 flight and is making his first trip to space. "I believe this is a very important event and we are very proud of our country, as well as for our cosmonautics," Space.com reports.