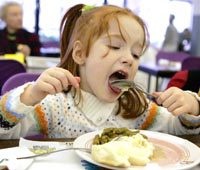 After staunchly defending the safety of artificial food colorings, the federal government is for the first time publicly reassessing whether foods like Jell-O, Lucky Charms cereal and Minute Maid Lemonade should carry warnings that the bright artificial colorings in them worsen behavior problems like hyperactivity in some children.

The Food and Drug Administration concluded long ago that there was no definitive link between the colorings and behavior or health problems, and the agency is unlikely to change its mind any time soon. But on Wednesday and Thursday, the F.D.A. will ask a panel of experts to review the evidence and advise on possible policy changes, which could include warning labels on food, New York Times reports.

Artificial food dyes are made from petroleum and approved for use by the FDA to enhance the color of processed foods. They've been around for decades and are found in everything from pudding to potato chips to soft drinks, according to NPR.

The Center for Science in the Public Interest is asking the FDA to go further. They want warning labels first before they ban the use of yellow dye № 5 and "other food dyes".

"About 3 to 10 percent of school-age children in the United States suffer from hyperactivity attention-deficit hyperactivity disorder," the group said in a statement. The center says that there are "numerous scientific studies" that have provided "at least partial substantiation of what became known as the ‘Feingold Diet'. Those studies show that in some children behavioral problems are exacerbated by Yellow 5 and other synthetic food dyes."

Some parents have taken pre-emptive action and refused to allow their kids to eat foods containing the dyes. Many have said it works. Their kids showed improvement.

Here are some of the symptoms: easily distracted, difficulty maintaining focus, daydreaming and failure to follow instructions.