Soyuz TMA-M with crew of three undocks from ISS 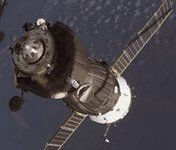 The advanced Soyuz TMA-M spacecraft with a crew of three undocked from the International Space Station in automated mode on Wednesday, Russia's Mission Control said.

The landing of the capsule carrying Russian cosmonauts Alexander Kaleri and Oleg Skripochka, and U.S. astronaut Scott Kelly is expected later on Wednesday at a designated area in Kazakhstan, RIA Novosti reports.

Shortly after undocking, and before leaving the immediate vicinity of the space station, Kaleri plans to test the new equipment to make sure it is working properly, using it to maintain a specific orientation and verifying the operation of hand controllers to manually fire the spacecraft's thrusters.

If the test goes smoothly, the crew will have the full suite of Soyuz re-entry modes available for descent to Kazakhstan: two automatic modes and two manual modes, according to Spaceflight Now.