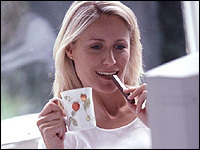 According to a new study of British scientists, higher indoor temperatures during the winter may be contributing to rising rates of obesity in the United States and other developed countries.

Reduced exposure to cold may affect the ability to maintain a healthy weight by minimizing the need for energy expenditure to stay warm, as well as reducing the body's capacity to produce heat, said the researchers.
They found that winter indoor temperatures in the United States and the United Kingdom have increased over the past few decades, which means people are spending more time in milder temperatures, BusinessWeek reports.

If the body is already warm it does not need to convert a ‘brown' fat known as adipose ­tissue into energy to generate heat, the study said. Brown fat was previously thought to be present only in infants, playing a vital role in keeping them warm, but recent research found it also in adults.

This latest study suggested that prolonged exposure to comfortable warm temperatures may permanently reduce the body's ability to burn this brown fat, according to Daily Mail.

"Changes in the way we eat and physical activity levels are the primary factors behind increases in obesity, [but] other aspects of our lifestyle can also make a contribution," says study researcher Fiona Johnson, a research psychologist in the department of epidemiology and public Health at University College London.

Johnson and colleagues reviewed the literature to determine how our desire to stay warm may be affecting our body weight, WebMD reports.