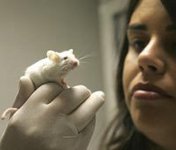 A team of researchers at Osaka University under the Evolved Mouse Project have been using genetically modified mice for generations to see what would happen, and came upon the 'tweeting' mouse by accident, according to TVNZ.

The original singing mouse came out of the University of Osaka's "Evolved Mouse Project," which is basically the genetic engineering version of the infinite-monkeys-with-typewriters thing: Scientists breed genetically modified mice that are "prone to miscopying DNA and thus to mutations" and then sort of... see what happens. "We have cross-bred the genetically modified mice for generations to see what would happen," the project's lead researcher, Arikuni Uchimura, says, Gawker reports.

The tweeting mice, by contrast, sing more loudly when they are put in different environments or when males are put together with females, indicating that the sounds could represent some sort of expression of their emotions or bodily condition.

The team has discovered that ordinary mice which grew up with singing mice emitted fewer ultrasounds than others, which lead researcher Arikuni Uchimura says could indicate that communication methods can spread amongst a group.

In the long term, Uchimura says he hopes that genetic engineering of mice could go rather further, TG Daily informs.