Monday night's lunar eclipse to be covered with clouds 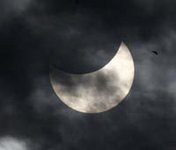 A total eclipse of the moon Monday night will coincide with winter solstice, which means the moon will appear high in the sky and be visible throughout all of North and Central America.

Starting around 10:33 p.m. PST, the full moon, normally illuminated by the sun, will pass through the shadow, or umbra, created by Earth blocking the sun's light, according to Seattle Times.

As sun, Earth and moon align, the moon can turn totally dark. More often though, sunlight refracted by the Earth's atmosphere shines coppery red or orange on its face. "Basically, it is being illuminated by sunsets from all over the Earth," said Dr. Jeffrey Owen Katz, observatory director at the Custer Institute in Southold.

The eclipse will coincide with the winter solstice for the first time in nearly 300 years, Katz said, Newsday reports.