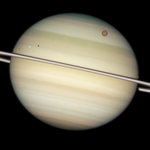 NASA's Cassini spacecraft has spotted what could be an ice volcano on Saturn's moon Titan, scientists said Tuesday.

The images were analysed by the US Geological Society, which noted the similarity of an area of the moon known as Sotra Facula to volcanoes on Earth. The findings were presented at a meeting of the American Geophysical Union in San Francisco.

Ice volcanoes, also called cryovolcanoes, have long been believed to exist in icy parts of the solar system, but the new evidence is the best yet that they exist. The images of two peaks more than 900 metres high are likely ice volcanoes, which spew water and icy particles to the surface instead of hot lava, scientists said, Sify reports.

Topography and surface composition data from Cassini offer the best support yet for an Earth-like volcano landform in the outer solar system that erupts in ice, NASA scientists said.

"When we look at our new 3-D map of Sotra Facula on Titan, we are struck by its resemblance to volcanoes like Mt. Etna in Italy, Laki in Iceland and even some small volcanic cones and flows near my hometown of Flagstaff," Cassini radar team member Randolph Kirk said in a release.

Results were presented Tuesday at the American Geophysical Union meeting in San Francisco.

Cassini launched in October 1997, and began orbiting Saturn in 2004. Saturn has more than 60 known moons, with Titan being the largest, CBC.ca reports.