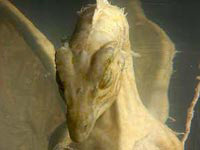 An international team of scientists from South Korea, the United States and Japan just announced the discovery of a new horned dinosaur, based on an analysis of fossil evidence found in South Korea. Dubbed "Koreaceratops" after its country of origin, the new dinosaur fossil was found in 2008 in a block of rock along the Tando Basin reservoir.

At approximately 5 to 6 feet long and weighing between 60 and 100 pounds, the animal was relatively small compared to its geologically younger, giant relatives like North America's Triceratops, according to Fox News.

"This is a rare find," said Michael J. Ryan of The Cleveland Museum of Natural History, who co-authored the research.

"Fossils of dinosaurs have not typically been found in this region, whereas evidence of dinosaur eggs and footprints occur more commonly. This specimen is significant because it fills in a missing 20 million-year gap in the fossil record between the origin of these dinosaurs in Asia and their first appearance in North America," said Ryan, BioScholar News reports.