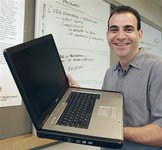 Millions of men are putting their reproductive health at risk by balancing their laptops on their knees, experts have warned.

Researchers from the State University of New York asked 29 young men to work on computers placed on their laps. They then measured the change in temperature in their genital area.

They found that the volunteer's testicles quickly heated up to dangerous levels, even when they had protective pads underneath their laptops.

'Within 10 or 15 minutes their scrotal temperature is already above what we consider safe, but they don't feel it,' Daily Mail reports.

"I wouldn't say that if someone starts to use laptops they will become infertile," Sheynkin said.

But frequent use could cause problems, he said, because "the scrotum doesn't have time to cool down." The researchers found the temperature of the men's testicles rose by up to 2.5 degrees Celsius after working with the computer positioned on their legs.

If found to affect fertility, laptops would join a roster of lifestyle factors like diet, drug use, exercise habits and nutrition that men should monitor in order to keep their reproductive systems healthy, New York Daily News informs.