One in every four sun-like stars have Earth-like planets 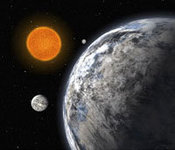 At least one in every four stars like the sun has planets about the size of Earth circling in very close orbits, according to the first direct measurement of the incidence of such planets, researchers said Thursday.

That means that our galaxy alone, with its roughly 200 billion sun-like stars, has at least 46 billion Earth-size planets orbiting close to the stars, and perhaps billions more circling farther out in what scientists call the habitable zone, said astronomer Andrew Howard of UC Berkeley, a coauthor of a paper on the subject published in Friday's edition of the journal Science.

Such planets "are like grains of sand sprinkled on a beach - they are everywhere," Howard said, Los Angeles Times reports.

"This is the first estimate based on actual measurements of the fraction of stars that have Earth-size planets," said Marcy, who did his observing with Howard at the Keck Observatory in Hawaii.

Their observations and extrapolations say nothing about whether these Earth-size planets will have the characteristics of Earth: its density, a distance from the sun that is just right for liquid water, the fact that it is a rocky structure rather than a gaseous ball.

But Marcy said that with so many Earth-size planets now expected to be orbiting distant suns - something on the order of 50,000,000,000,000,000,000,000 across the universe - the likelihood is high that many are in "habitable zones" where life can theoretically exist, Washington Post informs.