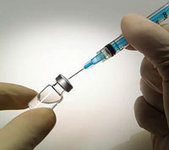 The Food and Drug Administration's additional approval of the wrinkle-smoothing injection Botox as a treatment for migraine headaches should prove to be a "watershed" moment for Allergan Inc.'s revenue and earnings growth, according to a William Blair & Co. analyst.

Ben Andrew said in a Monday morning research note that the new use could be worth $1 billion to Allergan's top line within five years, BusinessWeek reports.

Side effects reported included neck pain and--wait for it--headache. The FDA has ordered a "black box" warning on Botox packaging advising consumers that its active agent can migrate to other parts of the body, causing life-threatening reactions. But the agency said Friday that there has not been a confirmed case of such migration in cases in which Botox was used at recommended doses.

Friday's decision by FDA marks a major step in the march of Botox toward ubiquity. Since its introduction to the market as a cosmetic product, Botox has become a popular, but niche, medical product favored by aging baby boomers and movie actors (its powers of facial paralysis have been blamed for causing a dramatic decline in the quality of acting on the big-screen).

Botox has also won FDA approval as a treatment for excessive sweating and for involuntary spasms of the cervix and eyelids. Its use as a migraine treatment is likely to bring it into primary-care offices everywhere, Los Angeles Times informs.