Archaeologists at Ground Zero in lower Manhattan are racing to dig out what appears to be remains of the wooden hull of a stubby 18th century ship that construction crews stumbled upon earlier this week as they prepared foundations for the new World Trade Centre complex. 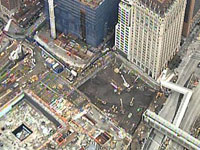 It has been almost 30 years since such a significant remnant of New York’s ocean-going past has been found beneath its pavements. As work continues unabated at the site, archeologists with a firm already hired to document finds of interest there, spearheaded efforts for the hull’s removal to safe ground and more detailed analysis, Independent informs.

The last time a major archeological find was made along the waterfront was in 1982, when an 18th-century cargo ship was discovered under 175 Water St.

"This is the biggest object we've found so far that has any historical significance," said Port Authority spokesman Steve Coleman, who added that the discovery is not interfering with excavation at the site, New York Daily News reports.