A group of thrilled historians claim to have discovered the site of King Arthur's storied "Round Table" at an ancient Roman amphitheater in Chester, England. But the discovery is a further indication that the "Round Table" was not a mere piece of furniture, but a massive wooden and stone structure that could seat some 1,000 people. 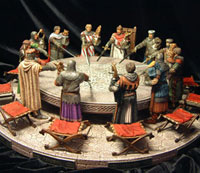 The historians believe that noblemen of Camelot sat in the front row of the circular meeting place, with lower ranked subjects on stone benches in an outer circle, Newser says.

“We know that one of Arthur’s two main battles was fought at a town referred to as the City of Legions. There were only two places with this title. One was St Albans but the location of the other has remained a mystery.”

The recent discovery of an amphitheatre with an execution stone and wooden memorial to Christian martyrs, has led researchers to conclude that the other location is Chester, Telegraph informs.