An international team of researchers climbed into a set of windowless steel capsules Thursday to launch a 520-day simulation of a flight to Mars intended to help real space crews of the future cope with confinement, stress and fatigue of interplanetary travel. 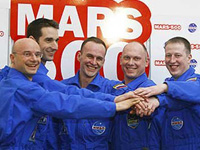 The six-member, all-male crew of three Russians, a Frenchman, an Italian-Colombian and a Chinese will follow a tight regimen of experiments and exercise under video surveillance, The Associated Press informs.

"This isn''t a joke. It will give a lot of useful information, not just about Mars but also for Earth," said Dr Christer Fuglesang, a Swedish astronaut with the human space flight directorate of the European Space Agency (ESA).