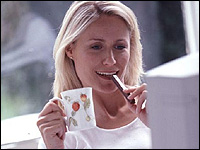 "We looked at a group of people representative of the U.S. population and found a very strong correlation between cardiovascular risk factors and the amount of sugar that people are consuming," said Dr. Miriam B. Vos, an assistant professor of pediatrics at Emory University School of Medicine in Atlanta, and a member of a group reporting the finding in the April 21 issue of the Journal of the American Medical Association, HealthDay News reported.

Excess sugar is known to contribute to obesity, diabetes, and other conditions linked to heart disease, and now new research links it to unhealthy cholesterol and triglyceride levels.

Eating large amounts of added sugar more than tripled the risk of having low HDL, which is a major risk factor for heart disease, according to WebMD.