NASA ordered astronauts aboard the space shuttle Discovery to skip their first landing attempt Monday because of rain and low clouds at their Florida landing site, leaving the shuttle one more chance to try to return to Earth today. 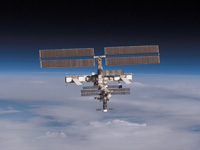 Discovery's crew of seven astronauts is returning to Earth after resupplying the International Space Station with tons of fresh supplies and new science equipment. NASA hoped to land the shuttle at the Kennedy Space Center in Florida at 8:48 a.m. EDT (1248 GMT), but thick clouds obscured the runway and rain showers were creeping too close to allow Discovery's return, Space.com informs.

If the weather improves in time for the second shot, Discovery will crisscross the United States on its trip home from the International Space Station. The streaking, glowing trail should be visible from the ground as the shuttle passes above Washington state and descends over America's heartland, The Associated Press reports.