A small chunk of rock believed to be a fragment from a meteor that burst into a stunning fireball over Wisconsin Wednesday night was discovered by a farmer after it fell on the roof of his shed. 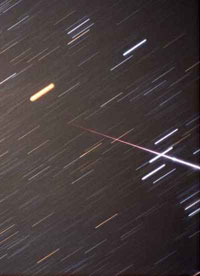 The meteor fragment is peppered with gray, white and reddish minerals, though one side is covered in what scientists called a "fusion crust" – a layer of dark material forged during the meteor's fiery passage into Earth's atmosphere. It weighs just 0.2 ounces (7.5 grams) and is about 2 inches (5 cm) long and less than an inch wide, according to reports in SPACE.com.

University of Wisconsin geology professor John Valley says fragment has a so-called fusion crust. The paper-thin blackened coating results when a meteor superheats as it speeds through the atmosphere.

Valley says the man who found the fragment lent it to university scientists for a two-hour analysis. Based on preliminary tests, the meteor appears to have come from the vast asteroid belt between Mars and Jupiter, The Associated Press informs.