Scientists "Play with Fire" in Collider 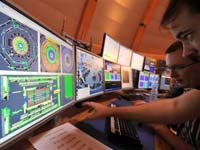 Scientists "Play with Fire" in Collider

Scientists at New York’s Brookhaven National Laboratory of the US Department of Energy successfully managed to create a 4-trillion degrees Celsius temperature – the hottest-ever temperature in the lab – at their gigantic atom smasher, the Relativistic Heavy Ion Collider (RHIC).

Lasting only for a few milliseconds, the ultra-hot temperature - which was 250,000 times hotter than that of the sun’s core and marked the re-creation of the universe’s first microseconds - was created by banging together gold ions at the RHIC.

Noting that “RHIC was designed to re-create conditions in the infant universe,” Brookhaven’s Steven Vigdor said at a news conference in Washington on Monday that the recently-created temperature “is hot enough to melt protons and neutrons.”

The ultra-hot lab explosions further underline the potential for future studies that will help the atom smashers understand the reason behind the creation of the universe as well as the way in which it was formed.

Working at comprehending the tiny irregularities that can elaborate why matter clumped out of the primordial hot soup; scientists perceive that some such event took place in milliseconds after the ‘Big Bang’ that brought about an disparity in favor of matter over anti-matter. It is believed that had there been no imbalance, matter and anti-matter would have simply reacted to create a universe of pure energy.