NASA Intends to Keep a Close Eye on Sun

NASA launched a science satellite on Thursday to keep a close watch on the sun and help improve forecasts of the solar storms that can disrupt navigational signals, satellites and power grids. 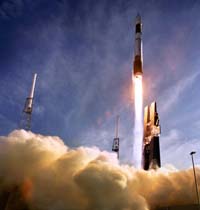 NASA Intends to Keep a Close Eye on Sun

The Solar Dynamics Observatory, or SDO, lifted off aboard an unmanned Atlas 5 rocket, made by United Launch Alliance, at 10:23 a.m. EST (1523 GMT) from Cape Canaveral Air Force Station in Florida, following a one-day delay due to poor weather.

The alliance is a joint venture between Boeing Co  and Lockheed Martin Corp.

From an orbital perch 22,300 miles (35,680 km) above Earth, the solar observatory is to spend the next five to 10 years watching the sun, relaying extremely high-resolution data and live imagery.

With no onboard recorders, NASA is expecting about 1.5 terabytes of data daily from SDO, enough to fill one compact disc about every 36 seconds.

"SDO is going to send us images 10 times better than high definition," project scientist Dean Pesnell said. "The pixel count is comparable to an IMAX movie -- an IMAX filled with the raging sun, 24 hours a day."

Solar physicists expect to use the information to improve predictions of solar flares and geomagnetic storms, which can disrupt GPS navigational signals, disable satellites and knock out power grids. Space weather also affects airlines, which have to reroute flights over Earth's poles due to radio interference.

"The goal is to develop a real physical understanding of what goes on so we can make more sophisticated predictions," added Alan Title, lead scientist for one of SDO's three instruments.

NASA, which is spending about $858 million on the mission, also plans to use SDO's data in an iPhone application called "3D Sun" which will display continuous three-dimensional views of the sun.