The search giant is upgrading its Gmail program to add social-media tools similar to those found on Facebook. Google will incorporate photo and video sharing within the Gmail application, along with a new tool for status updates. Google will hold a press conference at its Mountain View, Calif., headquarters today to show off the new features. 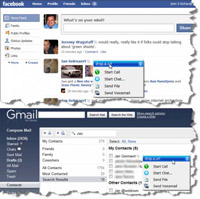 Google is still far and away the No. 1 most-visited website. But Facebook is close behind. The latter was the fourth-most-visited site in December.

"If Google can get you to do more things in Gmail, they can sell more ads, because you've spent more time there," says Danny Sullivan, editor of the Search Engine Landblog.

Facebook invites members to share photos, videos and status updates on their personalized home pages. Advertisers reach out there with ads that are targeted by age, gender, location and more.

Wedding photographers, for instance, can reach out to women in a specific ZIP code who are engaged to be married.

"Initially, Google misunderstood social media and its significance," says Greg Sterling, an analyst at Sterling Market Intelligence. "They've got the religion now and have been trying ever since to add more social utility. Social is how the Web has evolved."

Yet he thinks that bringing social tools to Gmail doesn't make sense. "Gmail is a good product as it is. I'm not sure these tools add anything except to make it more bloated."

Google recently added a new social search feature that can in part show you "results from people in your social circle."

In order to participate, Google users first must fill out profile information, similar to Facebook, which lists interests, contacts and friends.

In the end, no matter how big Facebook eventually becomes, Sterling says it will "never take away" Google's core business: search.