Today's  Google Doodle shows a painting by Rockwell called “Little Spooners” in which a boy and girl sit arm in arm on a bench as they stare at the sunset. 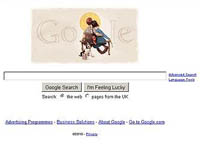 The painting was one of Rockwell’s most popular and appeared on the front cover of the Saturday Evening Post on April 24 1926.

Norman Rockwell was born on February 1894 and died of emphysema in November 1978. He created life illustrations for the Saturday Evening Post magazine over more than four decades.

He was also famous for his works in the Boy Scouts of America publication and for his iconographic advertisements for companies including Coca-Cola, Ford Motor Company and Sun-Maid Raisins.

He also painted portraits for Presidents Eisenhower, Kennedy, Johnson and Nixon, as well as other foreign presidents and movie stars of his day.

Google has been changing its Doodles - the graphical logos that sit above the search box on the otherwise minimalist page - more regularly over the last few months.