Experts promise tonight's full moon to be the biggest and brightest full moon of the year. It offers anyone with clear skies an opportunity to identify easy-to-see features on the moon. 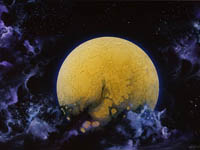 This being the first full moon of 2010, it is also known as the wolf moon, a moniker dating back to Native American culture and the notion that hungry wolves howled at the full moon on cold winter nights. Each month brings another full moon name.

Scientists give the explonation why this moon is supposed to be bigger than others:

The moon is, on average, 238,855 miles from Earth. The moon's orbit around Earth -- which causes it to go through all its phases once every 29.5 days -- is not a perfect circle, but rather an ellipse. One side of the orbit is 31,070 miles closer than the other.

So in each orbit, the moon reaches this closest point to us, called perigee. Once or twice a year, perigee coincides with a full moon, as it will tonight, making the moon bigger and brighter than any other full moons during the year.

Tonight it will be about 14 percent wider and 30 percent brighter than lesser full Moons of the year, according to Spaceweather.com.

As a bonus, Mars will be just to the left of the moon tonight. Look for the reddish, star-like object.