Unlikely as it may seem but laws banning the use of hand-held devices while driving have not reduced the rate of accidents in three American states and the District of Columbia, as a new study shows. 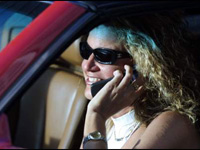 In addition to the nation's capital, the report by the Highway Loss Data Institute reviews insurance claims in New York, Connecticut and California. It also compares the data to other areas that do not have cell phone bans.

"The laws aren't reducing crashes, even though we know that such laws have reduced hand-held phone use, and several studies have established that phoning while driving increases crash risk," said Adrian Lund, president of the Highway Loss Data Institute.

There were no fluctuations in collision rates before and after the laws were put in place, the report said.

According to the study, the crash rates in the nation's capital were the same as in Virginia and Maryland, which don't have laws limiting the use of cell phones while driving.

Increased rates of crashes when drivers use hand-held cell phones have been well documented, so it's unclear why the four jurisdictions' accident rates did not mirror the trend after their cell phone bans took effect.

"This is surprising, too, given what we know about the growing use of cell phones and the risk of phoning while driving," he said. "We're currently gathering data to figure out this mismatch."

The report comes on the heels of a federal ban on texting for drivers of commercial vehicles such as buses and large trucks. The ban, which was announced Tuesday, is effective immediately.

Last year, the National Safety Council called for a nationwide ban on cell phone use while driving, a prohibition opposed by the industry.

"Studies show that driving while talking on a cell phone is extremely dangerous and puts drivers at a four times greater risk of a crash," said Janet Froetscher, the council's president.