YouTube is taking its first steps into the online movie-rental business, starting with a handful of films from the Sundance Film Festival that it will offer on its Web site starting this weekend. 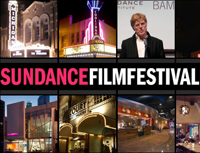 YouTube will have five films to rent from the 2009 and 2010 Sundance festivals, it said in a blog post Wednesday. They'll be available from this Friday until Jan. 31, when the festival ends.

It's a modest start for the Google-owned site, but it appears to be just the beginning. "In addition to these five films, a small collection of rental videos from other U.S. partners across different industries, including health and education, will be made available in the weeks ahead," YouTube said.

In the coming weeks it will also "invite a small group of partners across other industries, in addition to independent film, to participate in this new option."

"Making content available for rent will give our partners unprecedented control over the distribution of their work -- they can decide the price of their videos and the rental duration," the company said.

The Sundance films it will offer include 2009's "The Cove" and 2010's "Bass Ackwards" and "One Too Many Mornings." YouTube said it is a sponsor of this year's Sundance, which also has its own YouTube channel.

The rentals will be available to U.S. users only, Google said, and it appears users will need to have a Google Checkout account to rent them. Prices weren't announced; Google said it will provide more information in another blog post Friday.