A recent study on the Siachen glacier says that its snow area has grown by nearly two kilometres in the past 40 years.

The report nails the alarmist approach of the Inter-Governmental Panel on Climate Change (IPCC) that Himalayan glaciers are melting faster than any other. 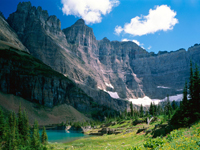 The findings are based on the experiments carried out in Siachen by Dr RK Ganjoo, director of the Institute of Himalayan Glaciology in Jammu University.

Ganjoo found that while the east flank of the 80 km long glacier has lost 0.65 sq km area, the west flank has gained 2.41 sq km. Overall, the glacier has gained 1.76 sq km in the past four decades.

The study belies the theory that global warming has affected glaciers equally in all parts of the world. Ganjoo’s studies in various zones of Siachen glacier revealed different results.

“If we are to go by their (IPCC) theory, global warming should have impacted the entire glacier equally from all sides. But this hasn't happened,” he said.

The real increase in the glacier's snow area would be known through sustained studies. “Longer experiments will show whether the glacier is gaining in length or width. But it can be safely said that it is gaining health,” he further said.

Daily News and Analysis has contributed to the report.