Countryman Is Cute and Convenient

A few hours after Drive On revealed the pictures, Mini just let loose with a torrent of information about its hearty new Countryman, a smallish crossover coming to the U.S. in early 2011. 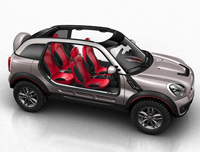 Countryman Is Cute and Convenient

The Countryman is intended to be Mini's fourth model, after the hardtop original, convertible and roomy Clubman. It's first true five-door with optional all-wheel drive.  Like all Minis, it tries to be novel, and inventiveness sure shows up with the track system down the middle:

"The Mini Center Rail may be fitted with holders for entertainment and telecommunication devices, cup holders, a case for sunglasses ... as well as center armrests held safely and comfortably in position. The holders and storage bins placed on the center rail may then be moved forward and backward to any desired position."

Countryman arrives with two engines, both derived from a "rev-happy" 1.6-liter four-cylinder gas engine. The basic one gets 120 horsepower. The turbocharged one in the Cooper S Countryman has 180 horsepower. It goes from zero to 60 miles per hour in 7.6 seconds and has a top speed of 128 mph. Fuel consumption figures aren't being disclosed yet.