U.S. Children Spend Their Day in front of TV

For the first time, children ages 8 to 18 decreased the amount of time they spent watching television. 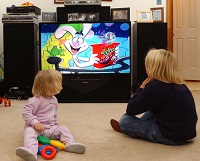 U.S. Children Spend Their Day in front of TV

According to a study by the Kaiser Family Foundation, the time American kids spend in front of the TV dropped 25 minutes from 2004 to 2008.

Though TV-time is decreasing, kids are spending significantly more time consuming media as a whole. Children spend an average of 7 hours and 38 minutes a day watching some type of screen, up from 6 hours and 21 minutes in 2004. Include the use of more than one medium at once, and the number skyrockets to 10 hours and 45 minutes.

While TV is still dominant - taking up an average of 4 1/2 hours a day - every other medium excluding movies and print increased from 2004 to 2008.

Though the overall increase in use of media is not surprising given the technological advances over the past five years, the results of the study could be significant.

According to Broadcasting & Cable, the study will be a part of the FCC's proceeding on kid's media, in which the regulatory organization will attempt to better control mobile and online media for children.

The Business Insider has contributed to the report.