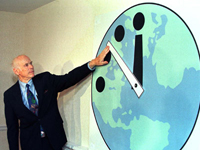 This shift of one minute, the smallest adjustment in the history of the clock, indicates that the scientists are slightly more optimistic that the world might be able to address its problems and increase its security.

The Doomsday Clock is a symbolic clock face, maintained since 1947 by the board of directors of the people Bulletin of the Atomic Scientists at the University of Chicago. The closer the clock is to midnight, the closer the world is estimated to be to global disaster. Since its creation the time on the clock has changed 19 times.

Originally, the analogy represented the threat of global nuclear war, but since 2007 it has also reflected climate-changing technologies and "new developments in the life sciences and nanotechnology that could inflict irrevocable harm."

Since its inception, the clock has been depicted on every cover of the Bulletin of the Atomic Scientists. Its first representation was in 1947, when magazine co-founder Hyman Goldsmith asked artist Martyl Langsdorf (wife of Manhattan Project research associate and Szilárd petition signatory Alexander Langsdorf, Jr.) to design a cover for the magazine's June 1947 issue.

Daily Finance has contributed to the report.