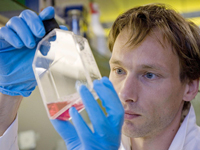 Dutch scientists have succeeded in growing a pork chop in the lab from stem cells.

The faux chop is made of 2cm long meat strips and is believed to have the texture of a scallop.

Researchers say this could be an eco-friendly alternative to farming livestock.

"If we took stem cells from one pig and multiplied it by a million, we'd need a million fewer pigs to get the same amount of meat," according to Mark Post of Maastricht University in the Netherlands.

Still, any scientifically-made products raise certain concern among population and are not sure to be welcomed by many.

Daily News and Analysis has contributed to the report.