Women are Genetically Closer to Chimps than Men

In genetic terms, as everyone knows, human beings are in general very similar to chimpanzees. However, scientists have now discovered that the Y chromosomes - found only in the males - of the two species are extremely dissimilar. 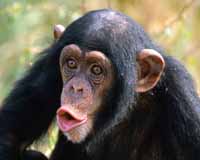 Women are Genetically Closer to Chimps than Men

The new study is reported this week in magazine Nature, covering a study by David Page of  Cambridge Institute, America, and his colleagues.

According to the boffins' analysis, most parts of the human and chimp (Pan troglodytes) genome are very similar, differing by "less than one per cent" in gene number. But the human male's Y chromosome is hugely more complex than that of our remote arboreal cousins.

The massive divergence between the relatively basic chimp male chromosome and the complex, information-packed one found in men is theorised to be the result of rapid evolution taking place over the six to seven million years since humanity's remote ancestors split off from those of chimps.

What this means, of course, is that women are in fact much closer genetically to being chimps than men are. Some have even interpreted the research to mean that men are "more evolved" than women, having left their heritage as apes further behind than the ladies.

Technically speaking this is correct, but Page and his colleagues caution that most of the rapid changes taking place in men haven't involved anything that modern civilisation would necessarily regard as evidence of superiority: the shift from poo-flinging to speech and writing as means of expressing oneself, for instance, is unrelated to the Y chromosome.

What the Y chromosome is mainly about, seemingly, is spunkiness.

"When we sequenced the chimp genome people thought we'd understand why we have language and write poetry," says Page. "But one of the most dramatic differences turns out to be sperm production."

Register.co.uk. has contributed to the report.