Egypt's Pyramids Were Built by Free Workers, not Slaves

Guides will have to amend their texts of story of creation of one of the seven wonders of the world.Tombs discovered near Egypt's great pyramids reinforce the theory they were built by free workers rather than slaves. 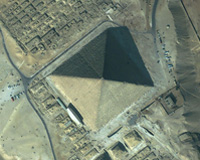 Egypt's Pyramids Were Built by Free Workers, not Slaves

The location of the tombs, where workers who built the pyramids of Khufu (Cheops) and Khafre (Chephren) are buried, suggests they were not slaves.

The tombs, made from bricks of dried mud, date back 4,500 years.

They are the first to be discovered since the first such workers' tombs were found in 1990.

"These tombs were built beside the king's pyramid, which indicates these people were not by any means slaves," Zahi Hawass, the chief archaeologist heading the Egyptian excavation team, said in a statement.

"If they were slaves, they would not have been able to build their tombs beside their king's."

Evidence from the site indicated the approximately 10,000 workers who built the pyramids had eaten 21 cattle and 23 sheep sent to them daily from farms in the Delta and Upper Egypt, said Dr Hawass.

This would suggest the farmers who sent the animals were not paying their taxes to the Egyptian government, but were sharing in one of Egypt's national projects, he added.

The workers were employed for three-month stints, and the tombs, which date from the 4th and 5th Dynasties (2649-2374 BC), were for those who died during construction.

The authorities have long fought what they call the "myth" of slaves building the pyramids, saying it undermines the skill involved in their construction, and the sophistication of ancient Egypt's civilisation.