Skype on TV to Help Save Expenditure on Tickets

On Tuesday, Panasonic and LG Electronics, two of the top television makers, are to announce that they are integrating the free online calling service Skype into their Internet-connected high-definition televisions. 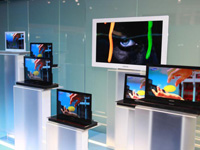 Skype on TV to Help Save Expenditure on Tickets

People who buy these TVs, along with an extra Web camera and microphone accessory designed for the living room, can conduct free, live video chats and phone calls from the couch.

The announcement is the first of many expected from TV manufacturers at the Consumer Electronics Show in Las Vegas this week. Television makers are trying to give consumers reasons to begin replacing their high-definition TVs that they bought only in the last few years. TV makers are also trotting out ever-slimmer TVs, adding Internet connections and preparing to introduce 3-D technology.

“This is the year when Internet-connected TVs will start to take off, and there is no doubt that soon every TV that ships will have built in Wi-Fi, webcams and microphones,” said Jonathan Rosenberg, chief technology strategist of Skype. “This is our first step.”

The domestic TV market survived the recession in surprisingly good health, shipping 33.86 million units during 2009, up 17 percent from 2008, while retail sales were generally flat, according to the research firm iSuppli. But furious competition among manufacturers cut deeply into prices and profits, with the price of a 46-inch LCD TV, for example, falling under $1,000 for the first time.

Internet-enabled TV sets, though they have not yet proved a hit with consumers, can restore some of those shrunken profits. A 50-inch plasma, high-definition TV with a broadband connection from LG runs about $300 more on Amazon.com than a TV of the same size without the connection. In some cases, TV makers also get a slice of the revenue when customers make Web purchases from their TVs.

That is where Skype comes in. Until now, Web-connected TVs have accessed only a limited number of online services, like widgets from Yahoo that offer weather and news updates, or Netflix’s streaming movie service. By adding other services and making a television more like a PC, TV makers now want to change the very identity of the primary screen in the house.

The Skype service on a TV will work much as it does on a PC, but with some limitations. A TV program will stop playing once a Skype call is made or answered; TV processors are not yet powerful enough to allow people to chat while they watch a show, the companies say.

Panasonic, based in Japan, and LG, based in South Korea, will sell specially designed Web cameras for their Skype-enabled sets, which should cost $100 to $200. These cameras, unlike typical webcams, are customized for the technically challenging environment of the living room, where there can be a wide range of distances between the TV and viewers.

The deals give the newly independent Skype, formerly a division of eBay, another valuable foothold in the home. About 520 million people around the world use the service to place free phone calls and have video chats with one another from their computers and other devices that run Skype software. The company makes money by charging competitive rates for people to call regular phone numbers and for add-on services like voice mail.

Video chatting has become an increasingly important feature of Skype.

Skype makes no money from video chats, at least for now. But Mr. Rosenberg of the company says that it may soon start charging for add-on services, like the ability to set up a video conference call for three or more parties.