This month will bring the second of two full moons for North Americans on New Year's Eve. Some almanacs and calendars assert that when two full moons occur within a calendar month, that the second full moon is called the "blue moon." 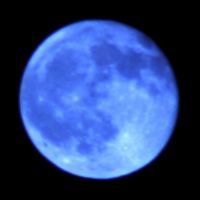 The term has a very interesting history, riddled with misconceptions and errors. More on that lower down. First, what will (and won't) happen:

The full moon that night will likely look no different than any other full moon.

But the moon can change color in certain conditions. After forest fires or volcanic eruptions, the moon can appear to take on a bluish or even lavender hue. Soot and ash particles, deposited high in the Earth's atmosphere, can sometimes make the moon appear bluish.

In one example, smoke from widespread forest fire activity in western Canada created a blue moon across eastern North America in late September 1950. In the aftermath of the massive eruption of Mount Pinatubo in the Philippines in June 1991 there were reports of blue moons (and even blue suns) worldwide, Space.com  reports.

Elvis Presley crooned about it when he sang the old Rodgers and Hart song "Blue Moon," in which he stood alone without a dream in his heart or a love of his own.

He struck a more hopeful tone in another tune, singing about his love returning to his arms "When My Blue Moon Turns to Gold Again." He also covered Bill Monroe's bluegrass classic, "Blue Moon of Kentucky."

It is possible for the moon to have a cerulean hue, NASA says, but that's sometimes caused by fine dirt circulating in the Earth's atmosphere or the dark blue tone of the sky, CNN reports.

Meanwhile, the National Weather Service is predicting a 30 percent chance of rain Thursday night and partly cloudy skies, said John Pendergrast, meteorologist at the weather service station in Melbourne.
"Partly cloudy means 45 to 66 percent sky cover," Pendergrast said. "We're expecting a cold front to move through on Thursday and bring some clouds with it. If the front comes a little quicker, the sky might clear out and give better conditions for seeing (the moon)," Sun-Sentinel reports.