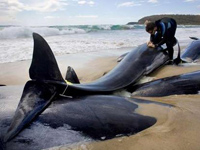 One stranding was on a remote northwest area of South Island and the other happened on the Coromandel Peninsula, Radio New Zealand reported Monday.

John Mason, the Department of Conservation's Golden Bay area manager, said 70 of 106 whales spotted near Farewell Spit had died by the time personnel arrived and many of the others were in such bad shape, they had to be put down.

On Sunday, residents, vacationers and others joined Department of Conservation personnel to rescue a pod of pilot whales beached at Colville Bay on the Coromandel Peninsula. Forty-two whales were refloated, but the remaining 21 died.

UPI.com International has contributed to the report.