Astronauts from the United States, Russia and Japan were optimistic about their holiday season space mission during their interview to International channels. Monday they launched to the International Space Station from Russia's remote space complex in southern Kazakhstan. 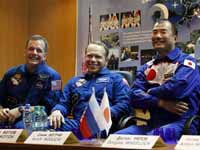 Their Soyuz TMA-17 rocket was primed at the Baikonur launch pad — where Yuri Gagarin made the first human trip into orbit in 1961 — for a mission that encreases the number of crew at the orbital laboratory to five members.

Striking a festive mood, the space station this week beamed a video Christmas greeting to Earth.

On its Web site, NASA has created a series of virtual postcards for members of the public to send to the space station with their holiday greetings.

The three astronauts are joining Jeff Williams, another American NASA astronaut, and Russia's Maxim Surayev, who have been alone on the space station since the start of the month.

The first space station crew arrived in 2000, two years after the first part was launched. Until the May launch, no more than three people lived up there at a time. Prior to that, there were as many as six people aboard for several periods when a space tourist would go up with one crew, spend a week or so aboard and come back with another crew.

With the U.S. shuttle fleet set to be grounded soon, NASA and other international partners will have to rely on Russian Soyuz spacecraft alone to ferry their astronauts to the space station and back.