An Israeli hacker  claims to have broken the copyright protection on Amazon's Kindle e-reader, reports say. 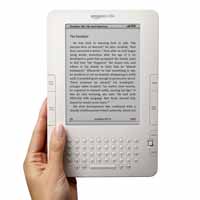 The hack will allow the ebooks stored on the reader to be transferred as pdf files to any other device.

The hacker, known as Labba, responded to a challenge posted on Israeli hacking forum, hacking.org.

It is the latest in a series of Digital Rights Management hacks, the most famous being the reverse engineering of iTunes.

The Kindle e-book reader has been very successful since it was launched in the US in 2007.

Amazon hopes to have sold a million devices by the end of the year.

It leaves it to individual publishers whether they want to apply DRM but books in its main proprietary format .azw, cannot be transferred to other devices.

DRM has long divided opinion. While rights holders regard it as a crucial tool to protect copyright, consumers tend to hate it because it limits what can be done with content.

"DRM is not an effective way of preventing copying nor is it a good way of making sales. There isn't a customer out there saying 'what I need is an electronic book that does less," novelist and co-editor of the Boing Boing blog Cory Doctorow told reporters when the Kindle was launched.

As soon as a new DRM system is active, hackers begin to try and break it.

Most famously Jon Lech Johansen, known as DVD Jon, cracked the copy protection on DVDs in 1999.

He went on to break the copyright protection on iTunes, leading Apple to offer DRM-free music.

DVD Jon now runs a company with an application to take the pain out of moving different types of content between devices.