Customer Nags at HP Co for Negligence to Black Faces

Hewlett-Packard Co. is scrutinizing the facial-tracking software used in its personal computers, after a customer calling himself “Black Desi” said the program was racist because it was unable to follow his movements. 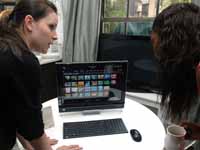 Customer Nags at HP Co for Negligence to Black Faces

“I think my blackness is interfering with the computer’s ability to follow me,” Desi said in a YouTube video. In the clip, the software fails to follow the movement of his face -- something it’s designed to do -- while easily tracking the face of his co-worker, referred to as “White Wanda.”

Hewlett-Packard, the world’s largest maker of PCs, said in a blog posting yesterday that it was examining the program. The software is designed to find faces by measuring the contrast between the eyes and upper cheek and nose, Hewlett-Packard said. The camera may have difficulty seeing the contrast in low-light conditions, according to the company.

“At this point, we’re working to better understand the potential issue,” Mark Budgell, a spokesman for Palo Alto, California-based Hewlett-Packard, said today in an e-mail. “In the meantime, we wanted the community to know that we are aware of it and working on it. When we have more information, we will provide an update.”

The video, posted on Dec. 10 under the title “HP Computers Are Racist,” has been viewed more than 75,000 times, according to YouTube.