Google's Doodle as a Touch of Sweet Memory

Google on Monday unveiled its latest Google Doodle, a festive tropical Christmas postcard that overlays the company's logo on its main search page. The company will be rolling out a series of additional Christmas Doodles between now and the holiday, and is archiving them at this web page. 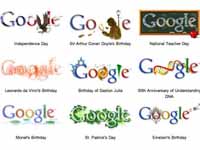 Google's Doodle as a Touch of Sweet Memory

Google Doodles have become so popular that scammers have started latching onto the topics and planting malware-infected pages designed to ensnare those looking for more information on certain Doodle subjects.

It's been a fun and varied year for Google Doodles, some of which are seen in all countries, some in just a portion.

• Google celebrated the anniversary of the bar code in October by using a bar code that translated into the word "Google." • Sesame Street's 40th birthday in November inspired a series of Google Doodles featuring characters such as Big Bird , Ernie and Bert.

• Google celebrated its own 11th birthday in September, doubling the number of "l"'s in its name to make it look like a number 11.

• UFO watchers got treated to crop circles in the shape of Google's name in September, as the company sent online users on a mysterious chase for the meaning of this Doodle.  The 40th anniversary of the first Moon Landing also was commemorated via Doodle showing Google's logo imprinted on the moon's surface.

• Other notables Doodles included a nice one of a dad and daughter digging a Google sand sculpture on Father's Day, the 25th anniversary of Tetris in June commemorated in colorful blocks and a Feb. 12 tribute to Charles Darwin, with Google's letters represented by nature's creatures and plants.

NetworkWorld.com has contributed to the report.