Earth Seem to Have a Water-Planet Neighbour

Astronomers reported Wednesday that they had discovered a planet composed mostly of water. 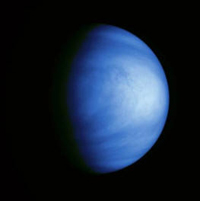 Earth Seem to Have a Water-Planet Neighbour

Besides the heat — 400 degrees Fahrenheit on the ocean surface — the planet is probably cloaked in a dark fog of superheated steam and other gases. But its discovery has encouraged a growing feeling among astronomers that they are on the verge of a breakthrough and getting closer to finding a planet that something could live on.

“This probably is not habitable, but it didn’t miss the habitable zone by that much,” said David Charbonneau of the Harvard-Smithsonian Center for Astrophysics, who led the team that discovered the new planet and will reports its findings on Thursday in the journal Nature.

Geoffrey W. Marcy, a planet hunter from the University of California, Berkeley, wrote in an accompanying article in Nature that the new work provided “the most watertight evidence so far for a planet that is something like our own Earth, outside our solar system.”

Only 2.7 times the size of Earth and 6.6 times as massive, the new planet takes 38 hours to circle a dim red star, GJ 1214, in the constellation Ophiuchus — about 40 light-years from here. It is one of the lightest and smallest so-called extrasolar planets yet found, part of a growing class of planets that are less than 10 times the mass of Earth.

An international team of astronomers using telescopes in Australia and Hawaii reported in one paper that they had found three planets, including a super-Earth, orbiting 61 Virginis, a star in the constellation Virgo that is almost a clone of the Sun. It was the first time, they said, that a super-Earth had been found belonging to a star like the Sun; the other home stars have been dwarfs.

The new planet is close enough to be studied directly by telescopes on or near Earth. Indeed, Dr. Charbonneau said his team had already applied for observing time on the Hubble Space Telescope.